Our students take part in many fundraising and local charitable projects each year. We believe that it is through giving time and assistance to local charities that we can contribute positively to the community.

To support the many charities each year the school also hold an annual Christmas raffle with over 120 prizes donated by parents, staff & pupils, all proceeds go to local charities. In the past we have presented donations to Focus Ireland, St. Vincent de Paul, Sosad, Drogheda Homeless Aid, Drogheda Animal Rescue Centre, Drogheda Sea & River Rescue, Boyne Fisherman River Rescue and many more.

Drogheda Grammar School donated the proceeds from the Christmas concert to The Northeast Cancer Research and Education Trust.

Every year as part of Drogheda Grammar School’s Anti-Bullying week, money is collected and donated to a charity/worthy cause, that the students feel strongly about.

This year, in light of the refugee crisis in Syria, and the countless amount of people sleeping rough on the streets of our own nation’s capital, it was decided that the chosen charity should be FOCUS  IRELAND, an organisation that deals mainly with the homeless.

As part of the annual Anti-Bullying week which was held last October, students bought wristbands with the slogan “Being different-belonging together”, and at the end of this week there was also a non uniform day.

Each student was asked to bring in €3, and the total amount of money collected came to €688.30. This sum was then presented to Focus Ireland.

The Annual Christmas Concert at Drogheda Grammar School was another great success. The proceeds from this year’s monster raffle went to SOSAD. We would like to thank most sincerely all the parents who donated raffle prizes and all the people who gave so generously on the night. We were delighted to present a cheque for €500 to this worthy charity.

On Tuesday December 18th we presented a cheque for this amount to Ray from the DHA.

Project Hope Shoe Box Apeal
Drogheda Grammar school is the largest collection point in the North East and will process over 2700 boxes in November. Most of our boxes go to Eastern Europe. This year there has been a 25% increase in boxes processed. 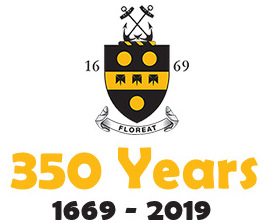 This year we are celebrating 350 years of first class education